Newly released census data showed that the demographics in New Brighton have changed and will continue to do so into the future. As an organization, this requires us to review our practices, policies, and procedures to ensure we are serving all of our residents, businesses, and visitors in the most effective manner possible.

View meetings and meeting materials of our newly formed Equity Commission which is advising the City Council on this work. 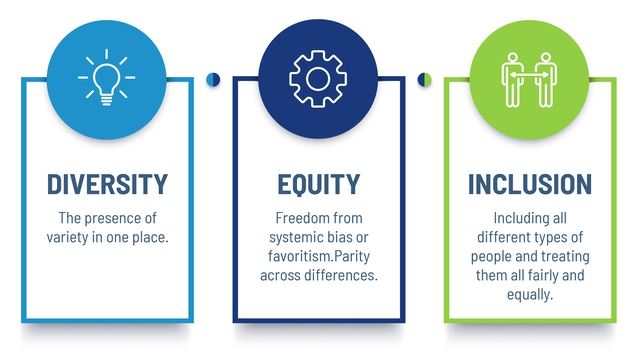 The creation and implementation of the Equity Strategic Action Plan continue the work begun by the New Brighton Inclusive Community Task Force. This group of appointed citizens met regularly in 2018 to discuss how the City of New Brighton can be more inclusive and welcoming to all people. Recommendations from the Task Force (PDF) were presented to the City Council and adopted in 2019. While some of the Task Force's recommendations were enacted, our organization has learned there are no quick and easy solutions. We need to build capacity in order to effectively address issues of equity in our community.

The Inclusive Community Task Force also did not provide recommendations directly related to racial equity. The Equity Strategic Action Plan builds off the work started by the Task Force and more comprehensively addresses issues and recommendations that were first identified by the Task Force. Our organization has also learned that the demographic fabric of New Brighton has changed. This makes the creation, execution, and follow-up of the plan even more important and urgent.

According to U.S. Census data, Black/Indigenous/People of Color (BIPOC) residents make up 31.2% of New Brighton's population compared to 19.9% in 2010. Specific populations of residents have seen increases in population numbers over the same time period: the population of people in New Brighton that identify as Black or African American has increased by 98% from 2010; Hispanic or Latino resident numbers has increased by 65%, and residents identifying as having more than one race increased by 133%. Almost half (46.5%) of all residents under age 18 in New Brighton are BIPOC residents. This compares to 26.8% for BIPOC residents age 18+. This highlights how our future population in New Brighton will continue to become increasingly diverse. The past and anticipated change in our overall demographics require us as an organization to review our practices, policies, and procedures to ensure our diversity, equity, and inclusion goals can be fully met.

At a societal level, we have seen how important it is for municipalities to intentionally address issues of equity especially in light of the COVID-19 pandemic and nationwide issues related to policing. Our Public Safety Department has been proactive in accomplishing its mission: "The New Brighton Department of Public Safety, in partnership with the community, is dedicated to protect, serve and educate. We value and promote respect for human dignity by ensuring a common goal of a safe community." We encourage all those interested to visit our Listen webpage which was set up to provide transparency in our policing services and data. While we have not experienced significant problems related to policing, we recognize the need to be constantly improving and building trust in the communities we serve. This holds true for all of our municipal departments and the entirety of our organization.

Juneteenth is a celebration of the day when African American slaves in Galveston, Texas learned of their freedom granted by the Emancipation Proclamation, which was issued over two years prior. This day in American history is federally recognized as Juneteenth National Independence Day. This Sunday, June 19th, commemorates the 157th anniversary of Juneteenth, also known as Freedom Day! If you would like to learn more about the history of Juneteenth please visit the Juneteenth website.

If you are looking for ways to celebrate Juneteenth with your friends or family, we encourage you to visit this list of local community celebrations view the Family Fun Twin Cities website.

We are committed to making New Brighton the preferred place to live, work and play for everyone. As an organization, The City of New Brighton understands that inequities exist in our community based on factors such as race, ethnicity, language, age, gender, sexual orientation, ability, and other differences. We know that the government has played a role in these systemic inequities. To succeed in our city's mission and vision, live up to our values, and accomplish our goals, we commit to addressing these inequities through access, opportunity, and quality services so that outcomes do not vary based on the differences above. We commit to the following as we strive for equity:

The City of New Brighton commits to the long-term work of becoming culturally competent, welcoming, and inclusive of all people both within and outside our organization, as well as in the range of issues and challenges that we engage in. This includes, but is not limited to:

The following principles must be front and center when executing our equity initiatives:

One of the drivers of disparity is the inability or unwillingness to examine the results of policies and activities for segmented racial, ethnic, cultural, or underrepresented groups. To achieve equity, therefore, we must collect and analyze quantitative and qualitative information in this way. Collect data segmented by census-based racial, ethnic and underrepresented categories and use that data to create options and make decisions.

Another driver of disparity is the unwillingness to use segmented data to make decisions that ensure parity. Consider racial, ethnic, and underrepresented information as we work. Compare results for each group against their presence in our service areas and against the results of the other groups. Provide these analyses when making recommendations.

We have valuable assets at our fingertips: knowledgeable staff, public officials, partners, community members, technical experts, professional services, intergovernmental agencies, and more. Tap into these institutional resources at all phases of your work.

Senior leaders, supervisors, other staff members, and public officials have individual powers within their jobs and roles. Explore and utilize these authorities as necessary to deliver on this Equity Plan.

Use Equity to Balance Decisions

When making decisions, give equity sufficient weight. Use segmented data, historical information, and quality comparisons. Develop a method for considering equity results balanced against financial and other business results, such as a decision matrix or balanced scorecard. This will ensure People of Color and underrepresented individuals and groups get due consideration, and that their interests are respected.

Culture is a social system that includes a group's shared language, customs, beliefs, values, and institutions. Culture affects thoughts and actions, often without us or others even being aware.

The people who serve as employees of the city. This includes residents, business owners, visitors, and guests of our city.

The presence of variety in one place. We often measure it in race, ethnic background, gender, age, class, culture, sexual orientation, or ability/disability. Diversity may also describe a set of actions to accommodate variety.

Describes a group of people who share a distinct culture, religion, language or place of origin. It is a category independent of Race. Therefore, in the U.S., people of the same ethnicity may be members of different races, such as Black Hispanics (such as people from Cuba, Brazil or the Dominican Republic).

Freedom from systemic bias or favoritism. Parity across differences. Product and service access, opportunity, quality and outcomes that do not vary by race, ethnicity, language, age, gender or other meaningful differences.

Including all different types of people and treating them all fairly and equally.

The term used in this plan as shorthand to describe a person who identifies as a member of at least one of the following racial census categories: Black or African American, Asian, American Indian and Alaska Native, Native Hawaiian and Other Pacific Islander, Some other race, and Hispanic. We recognize the problems inherent in using such a broad term. However, we use it only to increase plan readability.

City staff (see staff definition), elected, and appointed officials including but not limited to city council members and commissioners.

A race is a grouping of humans into categories based on shared physical or social qualities generally viewed as distinct by society.

All people are actively supervised by our organization and involved in accomplishing our work, including paid employees, volunteers, and interns (paid or unpaid).

Individuals or groups who have been denied access and/or suffered past discrimination. This is measurable by an imbalance in the representation in common pursuits. This includes but is not limited to people with a different race, ethnicity, language, age, gender, ability/disability, sexual orientation, or other meaningful differences. May also be described as any subset of a population that holds a smaller percentage within a significant subgroup than in the general population.