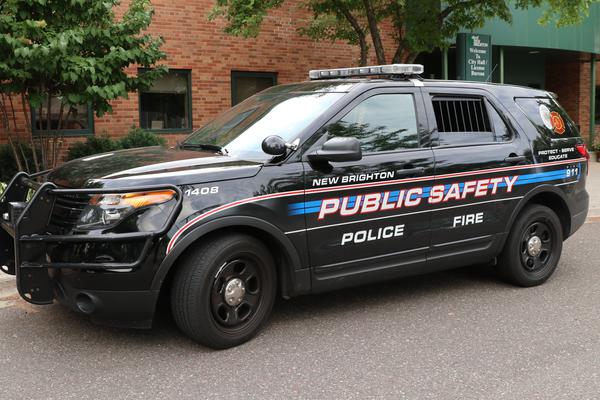 The New Brighton Department of Public Safety is rich with history and tradition, from the first Town Marshall to the current complement of police officers and firefighters our history lives through our people. Many long-time residents remember the Police Department of the 1940s and many of the former officers.

In 2000 the Police and Fire Departments merged to form the New Brighton Department of Public Safety. The Public Safety department has become a model other communities attempt to replicate due to its extremely cost-effective and efficient way of providing coordinated public safety services to the residents, businesses, and visitors.

To meet the needs of those we serve, we offer a variety of programs focused on keeping our community safe. Featured below are just a few of the programs which we offer to assist our community.

The City of New Brighton incorporated as the Village of New Brighton on November 18, 1890 with a population of 196 residents. The first mention of a Police Department occurred in the minutes of the first special meeting of the Council on June 15, 1891, in which "special police" were appointed for an anticipated loud and jubilant Fourth of July celebration.

Some of the first mentions of enforcement actions by the New Brighton Town Marshall, the predecessor to the Police Department indicate that on, December 8, 1894, Peace Officer Frank Harmon requested the Justice of the Peace charge Andrew Mattison with "loafing around the back yard of a resident." Mattison was arrested and stated he was looking for a Swede house and was fined the $50 he had in his pocket at the time. Among other crimes dealt with by the early New Brighton Town Marshall was the selling of apples in violation of the peddling permit ordinance for which the guilty party, Able Perelman, was sentenced to 20 days in jail and was taken by Marshall Clarence Thompson to the county jail to serve out his sentence. Much of the early crimes dealt with by the Town Marshalls dealt with property damage and assaults as a result of drinking alcohol.

On April 2, 1982, Frank Harmon was named he Village Marshall, Fire Warden, and Street Commissioner with a salary of $75. On November 6, 1893, citizens became upset at the thievery which was occurring during the evening hours and agreed to pay $5 for night policing. One week later at a special session of the Council, the petition for a night policeman was approved with the hours being set from 4:00 pm until 6:00 am with a pay rate of $55 and T. H. Williams was hired for the duty.

The office of the Chief of Police was established in 1946. Lawrence (Dude) Bona was the first person to fill this post and stayed for four years. Following Dude Bona, Mike Kush was appointed temporary Town Marshall and was subsequently followed by Donald Schaefer who in early 1952 purchased the first Police Car.

The following is a list of past Chiefs of Police:

(Information courtesy of the New Brighton Historical Society and A Centennial History of New Brighton Minnesota by Gene F. Skiba)

The Ramsey County Traffic Safety Initiative (RCTSI) is a collaborative effort between all police agencies within Ramsey County. The RCTSI consists of three program elements to address the enforcement phase of traffic safety.

The first and most visible program element of the RCTSI is the DWI Saturation Patrols. The DWI Saturation Patrols involve sending between one and three police officers from each agency within the County, for a total of 20-30 officers, to a directed geographic area to conduct high visibility enhanced traffic enforcement. The officers conduct enhanced DWI enforcement in the area to both detect and deter those who may choose to drink and drive.

The second component of the RCTSI is the on-duty enhanced enforcement events. Officers participating in the on-duty conducted enhanced traffic enforcement during their normal work shifts. These shifts are not grant-funded but assist in the deterrence and detection of those driving while impaired.

For more information on the RCTSI contact Sergeant Matt Farmer.

Project Lifesaver and SafetyNet refers to a system to rapidly locate vulnerable people that have a tendency to wander off and get lost. It is a tracking tool in the event a vulnerable person gets separated from his/her caregiver. The system includes equipment; training; procedures; and forms. It is administered by a law enforcement/public safety agency.

Typical "clients" include those who suffer from Alzheimer's, Autism, Down Syndrome, stroke, traumatic brain injury, or another short-term memory ailment. Once accepted into the program, the person has a wristwatch-sized transmitter attached to his/her wrist or ankle. It is worn 24/7 and transmits a radio pulse once a second. In the event the person becomes lost, the authorities are contacted and told that the missing person is a Project Lifesaver/SafetyNet client. The agency responds, knowing the details about the client, and quickly locates them using the tracking radio receivers. The range on the transmitters is about one mile on the ground and about seven miles from the air.